æ›¹æ²–ç¨±è±¡. This illustrates the story of Cao Chong’s method of weighing an elephant from the story “Records of Three Kingdoms”.

From Wikipedia: “Cao Chong (196 â€“ 208) was a son of the powerful 3rd century Chinese Chancellor Cao Cao. He was renowned as a child prodigy, having the intelligence of an adult at the age of five. He is best known for his ingenious method of weighing an elephant using the law of buoyancy.” 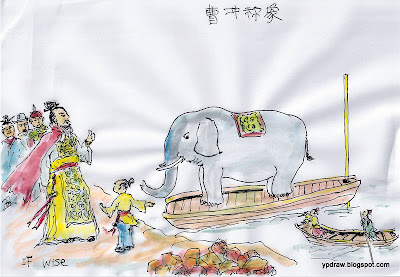